UPDATE: Contribute information on how your language identifies its arguments here.

When we execute a command in Ubiquity, in very simple terms, we’re hoping to do something (a verb) to some arguments (the nouns). Every sentence in every language uses some method to encode which arguments correspond to which roles of the verb. Here are a couple examples:

As speakers of English, you can read sentence (1) above and know exactly who is doing the seeing and who is being seen and speakers of Japanese can get the same information from (2). How do different languages code for arguments in different roles? There are, broadly speaking, three different ways: 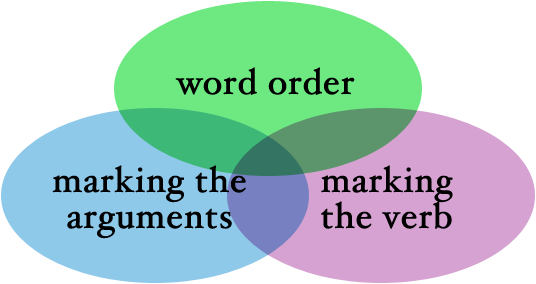 We’ll take a brief look today at these three different strategies, all of which a localizeable natural language interface will surely encounter.

In many languages, the position of the arguments relative to one another and to the verb determine the roles which each argument will play. Mandarin Chinese is a good example of such a language:

Here, sentence (3) says “he likes Mary” while sentence (4) says “Mary likes him”. Simply reversing the positions of “he/him” and “Mary” we’re able to flip the roles that they fill in the sentence: that of the person who does the liking and the person who is being liked. Now take a look at sentence (5) which means “John says ‘hello’ to Mary.”

We note here that, while in English we used a different strategy of marking one argument (we marked the “hello” argument with “to”), Chinese doesn’t mark either of the arguments. There is, however, a clearly defined order to the arguments, which you might encode this way:

If you swap the order of the two objects in this sentence, it becomes ungrammatical. (Note: the asterisk * here means the sentence is ungrammatical.)

Here, the word order dictates that “你好” must be “who you’re speaking to” and “Mary” must be “what you’re saying,” but that doesn’t make sense, so the sentence is ungrammatical.

Another possible strategy is to mark each argument (or some of the arguments) so that each argument’s role is clear. In many languages this is done with [[case marking]]. Take for example this Ancient Greek sentence with its English gloss on line (6). Here, NOM refers to [[nominative case]] and ACC refers to [[accusative case]].1

This sentence means “the teacher instructs the boy.” While sentence (5) is in Subject-Verb-Object order, any of the six possible orderings of {subject, verb, object} are also grammatical and mean the same thing:2

Many languages mark the verb with some information about the argument in a certain role, so that we can properly identify the argument’s roles. This kind of phenomenon is called agreement.

The most common type of verbal agreement is subject agreement, where the verb is marked by a specific form depending on some features of the subject. Anyone who’s taken French 101 will recognize this verb conjugation paradigm:

With this paradigm, if you hear or see “suis” in a French sentence, you immediately know that “je” (I) must be the subject and if you see “sommes,” “nous” (we) is the subject, etc. [[Standard Average European]] languages tend to exhibit this sort of subject-verb agreement.

Features of the subject position aren’t the only thing that can be marked on the verb, though. Hungarian, for example, has a type of object agreement. Specifically, the verb marks whether the object is definite or not (in linguistics lingo, “the verb agrees with the object’s definiteness feature”).

Notice that in sentence (12) (glossed in (13)) the verb for “see” is realized as “lát,” while in (14) it’s “látja.” A speaker can use that agreement to see whether the object is definite or not and thus limit the possible object arguments out of all the nouns in the sentence.

All of the above

Most languages do not use only one of these strategies, but a combination of them. English is a very good example. In a sentence like (12) below the main coding of grammatical roles seems to be word order alone. By reversing the word order into (13), we can effectively swap the argument’s roles.

However, this doesn’t work with pronominal arguments. Swapping the arguments in (14) yields (15) which is ungrammatical due to the case marking on the pronouns.

In addition, the verb in English must agree with the subject’s number (singular or plural):

In this way, English exhibits all three strategies: word order, case marking, and agreement, although often only word order is actively used to disambiguate the roles of arguments.

Question: What strategies are used by your language to mark the roles of different arguments?