Yesterday I blogged on how to deal with portmanteau’ed prepositions in Ubiquity Parser 2, a common problem in various romance languages. Today I’ll propose an approach to another romantic problem.

Weak pronouns in [[romance languages]] (as well as some other languages) have a special property where they cliticize to the verb, moving from its regular argument position to a position next to the verb. For example, in French, we have an imperative like (1) with gloss as (2):

If we replace le lettre or à Pierre with a preposition (le, “it”, or lui, “to him”, respectively), those weak pronouns move next to the verb—in particular, (5) exemplifies the change in word order. Replacing both arguments with prepositions creates the stacked clitic form of (7).1

The fact that these weak pronouns are attached to the verb and lack separate delimiters mean that we will need a separate mechanism to parse these arguments: indeed, this functionality has been planned in Ubiquity Parser 2 as “step 3”. Here I’ll examine some data and discuss a strategy for the parsing of weak pronouns.

In Ubiquity the only pronoun we currently deal with is the deictic object-role anaphor, like “it,” “this,” etc. in English.2 In addition, as these weak pronoun clitics cannot by definition be embedded within a larger noun phrase, its referent would constitute the entire object argument. As such, it is most logical to place clitic handling before argument structure parsing and simply hand the argument parser the argument string without the clitic.

We can classify languages with cliticized weak pronouns into two cases based on their processing considerations: languages that overtly mark the clitic and those which do not.

Languages which delimit the clitic

Some languages such as French (see above) clearly mark the boundary between the verb and the clitic. It will be relatively easy to parse weak pronouns in such languages as we can simply insert a no-width space between the verb and the clitic. A list of clitics can then be designated in the parser (much like anaphora are now) and these weak pronouns can be interpreted as the selection (or “this”-referent).3

Modern Greek: (from Rivero and Terzi 1995; I know, I know, Greek’s not a romance language, but it has weak pronoun clitics too… it’s all good.)

Modern Greek actually inserts a space between the verb and weak pronouns.

Languages which do not delimit the clitic

Some languages do not insert any delimiter between the verb and the weak pronoun, essentially entering them as a single word (in the string sense, at least). These cases may be more difficult to parse, especially as there may be sound changes to the verb stem itself.

Italian is a case where some verbs actually conjoin with the verb in imperatives, much like their prepositions which I noted yesterday have an elaborate system of portmanteau’ed forms.

Spanish is the same way:

The current Ubiquity handling of anaphora (aka “magic words”) involves a display of the selection (replacement) text in a stylized way. One problem with clitics may be how to visually present this replacement to the user. 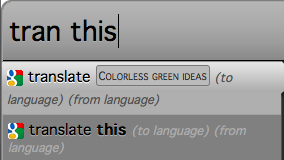 For languages with a delimiter such as French we could simply present the selection as an object right after the verb, without the hyphen.

Things may be more complicated, however, in languages where the clitic is not delimited from the verb, or where the verb form itself has changed due to the attachment of the clitic.

In this blog post I’ve tried to lay out some of the weak pronoun phenomena relevant to Ubiquity with some ideas on how to implement its parsing. I believe parsing weak pronouns should be relatively straightforward in languages with delimiters—for those which do not have delimiters, some creativity may be required in how building regular expressions or rules to detect the clitics and in presenting these suggestions to the user.

Does your language have weak pronoun clitics? What do you think will be the challenges in trying to parse these arguments?