Does Google’s corpus not identify “七面鳥” as a primarily Japanese word? Google does indeed attest to this fact: searching for “七面鳥” and limiting to a certain language yields the following number of hits. A similar effect can be seen with Japanese words such as “芝生” (‘grass’) or “泥棒” (‘burglar’). The “Japanese on first page” column gives the number of results that are in Japanese which come up in a language-unspecified search from the US.

In a perfect world, I would like Google to identify the language that the query is in, and then weigh results that are in that language higher in the results list. So the issue comes down to one of language detection.

There are broadly two different approaches to language detection and, indeed, all natural language processing problems: parsing and counting. In this case, parsing involves trying to break apart the query into words and then computing how likely such a string of words is in each given language. Counting simply takes an inventory of the characters given and compares them to their frequencies in each language, computing how likely such a string of characters is in each language. Parsing is the “smarter” approach, but more difficult and computationally intensive.

No. While spaces are sometimes used in Japanese and Chinese writing to represent word boundaries, especially around numbers and roman letters, they also are seen on the web to encourage line breaks. It would make sense for Google’s language detection service to ignore spaces in Chinese character queries and that does seem to be the case. All tests I ran with Chinese character queries gave the same result with same confidence with and without spaces in random places.

No. This was slightly disappointing to see. I took the Japanese string “骨粗鬆症” (‘osteoporosis’, if you’re curious) and ran every permutation against the language detector and got the same results, including the same confidence values. This is a clear indicator that Google uses only counting, not parsing, in their parser.

Yes. Now that it seems that Google does not use any parsing and only uses character frequencies in identifying the source language, let’s see how repetition can affect the detection service.

First, I took some Chinese character strings and ran them through the detection service with different numbers of repetitions, e.g. “参加”, “参加参加”, “参加参加参加”, “参加参加参加参加”… The queries I used were the following:

For each token type, the detection service made up its mind quite quickly. Its confidence, however, was more interesting. 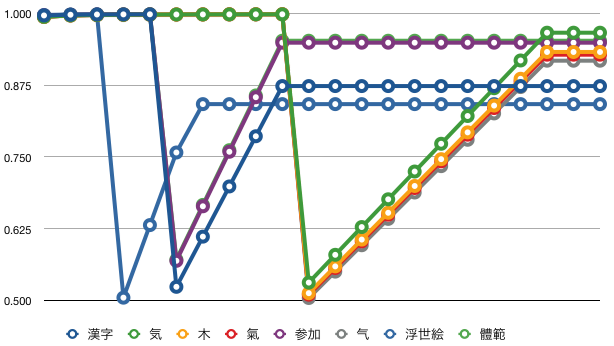 Each of the confidence values dips sharply after three, five, or ten repetitions. Note, however, the length of the tokens which dipped at each of those points. I interpret this to mean that there is a different parser for less than ten characters and ten or more characters. However, the detection service did not change its answer after this point on any of the tokens.

For Chinese character-based languages, Google’s language detection algorithm uses simple counting rather than parsing, identifying languages by looking at the frequency of characters rather than the frequency of words. As such, the algorithm simply acts as a script detector, not a language detector. Moreover, as a simple counting method is used, duplicating characters used in one language but not another can very easily skew the resulting output.

As a trivial aside, it seems that Google’s algorithm is slightly different for strings less than ten characters, as can be seen in a dip and then rise of confidence values after ten characters.